The Ministry of Utmost Happiness

The Ministry of Utmost Happiness 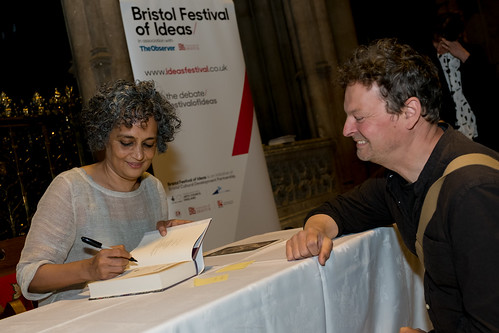 Two decades after her debut, Arundhati Roy returns this year with her long-awaited second novel, The Ministry of Utmost Happiness.

In a city cemetery, a resident unrolls a threadbare Persian carpet between two graves. On a concrete sidewalk, a baby appears suddenly, in a crib of litter. In a snowy valley, a father writes to his five-year-old daughter about the number of people that attended her funeral. A lone woman chain-smokes as she reads through her old notebooks. And in the Jannat Guest House, two people who’ve known each other all their lives sleep with their arms wrapped around one another as though they have only just met. Through a rich cast of characters, the novel tells a story spanning many years and an entire subcontinent.

Twenty years ago, Roy took the literary world by storm with her debut novel, The God of Small Things, the story of twins Rahel and Estha growing up in the politically turbulent state of Kerala in the 1960s. This tale of a family tragedy set against a background of social taboos, local politics and historical change received widespread critical acclaim and won the Booker prize in 1997.

Since her first novel, Roy has been published five books of nonfiction including Broken Republic and Capitalism: A Ghost Story that cover a range of nonfiction, covering India’s 1998 nuclear tests, the rise of Hindu Nationalism, the armed Maoist insurrection in central India, the struggle for self-determination in Kashmir and US invasions of Iraq and Afghanistan.  She has been jailed in the past for her views and is even now facing a trial for criminal contempt of court for an essay she wrote about an incarcerated college lecturer.

Arundhati Roy is the author of the Booker Prize-winning novel The God of Small Things. She has written several nonfiction books covering environmental, political and human rights issues, including The Algebra of Infinite Justice, Listening to Grasshoppers, Broken Republic, Capitalism: A Ghost Story and, most recently, Things That Can and Cannot Be Said, co-authored with John Cusack. She has been jailed in the past for her views and is even now facing a trial for criminal contempt of court for an essay she wrote about an incarcerated college lecturer. Her latest novel is The Ministry of Utmost Happiness.

When I Hit You